European Volleyball Players All Around the United States 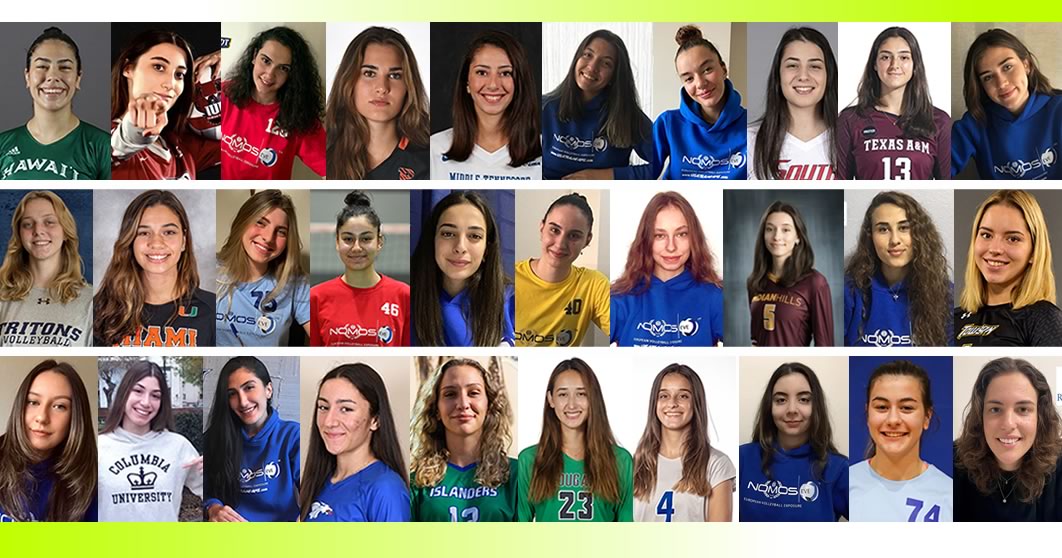 With yet another academic and athletic year ready to unfold before us, the total number of international female student-athletes continues to increase across the US. Hopefully, things will be closer to normal this upcoming fall and a new route in sports, education, and social life will be ready to be explored by young female student-athletes everywhere.

The number of players supported by Nomos who are competing in collegiate volleyball this year exceeds seventy, which is the highest it has ever been. These athletes hail from Turkey, Greece, Italy, Bulgaria, and Serbia, and are currently playing volleyball across the US. All of them are ready and excited to begin their quests in the new world of collegiate volleyball when the first serve of the collegiate championships tips off the last week of August.

A lot of players concluded last season with excellent performance and awards, and some of them are worth reporting. Pitt’s dream to reach the elite 8 was achieved with Zoi Faki on the team. Efrosini Alexakou was on fire while she gained a lot of individual awards such as the Big East Player of the Year. Beste Ayhan who plays for UMBC won the America East Championship and went dancing in the NCAA tournament. Elena Baka, the only Greek who has been awarded All-WCC first team for both beach and indoor volleyball. Then, in a remarkable run to the NJCAA D1 national title, Iremnun Elmas received NJCAA D1 All-American honors, and will take her talents to Brooklyn in NYC and don the St. Francis uniform. We can’t wait to see what’s coming next from all these amazing athletes who will be competing again soon.

During preseason preparations the girls are both sharing their high level international experience with their American teammates as well as learning how to compete and adapt in a new environment in the States. All these student-athletes were able to make their dream come true of being able to play collegiately in the United States, and for this they should be commended. While a lot of them have already received prestigious awards for their performance overseas, the incoming freshmen are ready to compete and work hard both in class and volleyball to prove their worth Stateside.

With the support of Nomos, which offers advice and guidance on sports law and specifically on the collegiate framework of a student-athlete's life, their dreams become reality. It is worth mentioning that most of these athletes took part in Nomos’ programs and the top-rated European Volleyball Exposure (EVE) showcase. EVE gives international volleyball players their first glance at the college recruitment process, gathering the necessary information and data related to the talent and effort required by US colleges and coaches. Now, the majority of those players have managed to attend US universities by getting full scholarships, which is something worth admiring.

We will be closely following seventy-two athletes who are continuously supported by Nomos during their collegiate volleyball careers. Their efforts, statistics, and competitive performance updates will be regularly monitored and highlighted on our social media platforms. Everyone on our team is excited for this upcoming season and can’t wait for the competitions to begin!

This year’s freshmen/players for the first-time playing in the US are: